"Grappling with a Guardian - Part 1", known as "The Fated Duel! Yugi vs. Rafael" in the Japanese version, is the one hundred and seventy-fourth episode of the Yu-Gi-Oh! anime. It first aired in Japan on October 8, 2003 and in the US on April 23, 2005.

Yami Yugi determined to bring down Doma and rescue Joey's soul, runs off and soon reaches their home office. Having a hunch of what's awaiting him, Yami quickly organizes his Deck while climbing to the roof. Once outside, like he was expecting to, finds Rafael, who was waiting for him.

Yami Yugi enters the Doma building. The lobby is empty and one elevator is descending there: when it opens, Mai's soulless body collapses on him. He notices a ghostly feather and a fog. He wonders if it's a feather from "Harpie Lady" but he seems to realize it isn't the case. He then enters the elevator and ascends to the roof to meet his opponent.

As Yami Yugi suspected, the feather belonged to "Guardian Eatos". Yami Yugi accuses Rafael of having defeated both Mai and Joey, given how he hands Yami Yugi "The Claw of Hermos". Rafael corrects him: Joey lost to Mai. Mai then came here and confronted him demanding to know Dartz's whereabouts. Rafael challenged her and used "The Seal of Orichalcos" against her. Even though she'd been wielding "Hermos", she apparently wasn't able to use it. Rafael is not moved by the losses of his two companions and he doesn't seem to be moved by anything as well as affirming that everything is a part of Fate. As they talk, a strange ghostly serpent-like shape flies across the world's skies, obscuring the stars: it is being noticed by people around the world.

Kaiba and Mokuba meet up with Tristan and Téa, who are carrying Joey's shell. They suddenly are forced to climb up some emergency stairs to escape a swarm of rats rushing across the streets. Everyone wonders if it's a sign of something.

Within the depths of the ocean, the Orichalcos god is growing in strength and opens an eye: it seems to be gazing at something.

Rafael tells Yami Yugi that he will fight him for the sake of the "new age" and it being a part of Fate. Yami Yugi shots back that he also wants to Duel Rafael but that's not "Fate", it's because Rafael is a true Duelist. Rafael keeps on insisting everything was arranged by Fate: this time, Yami Yugi's soul shall be seized to revive the Orichalcos god. As if to prove his point, he brings out a "The Seal of Orichalcos" card and shows it to Yami Yugi. Rafael then puts it on his own Deck and he and Yami Yugi shuffle each others' Decks. Yami Yugi claims to Rafael that he won't fall for the same trick twice.

Rafael employs the same strategies in the Duel as he did in his previous Duel with Yami Yugi.

Yami Yugi tells Rafael that he's sure that he won't use "The Seal" because he wants to protect his monsters. Rafael admits that though Yami Yugiis right about him wanting to protect his monsters, when you accept the "Dark" of your heart, then "Light" shines in the "Dark" and the answer (to Fate) comes out. Since Yami Yugi can't use it properly, Rafael will show him the true power of the "Seal". He plays the "Seal" just as Kaiba and company reach the scene.

Turn 1: Rafael
Rafael draws. He then activates "Guardian Treasure", discarding his entire Hand and drawing 2 cards. While "Guardian Treasure" is face-up, Rafael may draw 1 extra card from his Deck during each of his Draw Phases. Rafael then Normal Summons "Backup Gardna" (500/2200) in Defense Position and Sets a Card.

Yami Yugi then activates "Brave Attack" to add together the ATK of his three "Knights" during one battle this turn (1500 + 1600 + 1900 = 5000 ATK), intending to attack and destroy "Guardian Grarl" at the cost of his three "Knights" being destroyed at the end of the Battle Phase, however Rafael activates his face-down "Guardian Force" to negate the effect of "Brave Attack" and destroy it.

Turn 6: Yami Yugi
Yami Yugi draws. He then activates "Five Star Twilight" to Tribute "Jack's Knight" and Special Summon the five Kuriboh Brothers, "Kuriboh", "Kuribah", "Kuribee", "Kuribeh", and "Kuriboo" (300/200 each) from his Deck in Attack Position. Yami Yugi then activates the effect of "Kuriboo" to discard "Chain Destruction" from his hand and reduce the ATK of "Guardian Grarl" by 1500 ("Guardian Grarl": 3000 → 1500/1000). 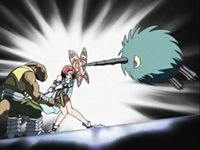 "Guardian Shield" defends from attack made by "Kuribabylon".

Yami Yugi then activates the effect of "Kuribah" to remove "Kuriboh", "Kuribee", "Kuribeh", "Kuriboo" and itself from play and Special Summon "Kuribabylon" (?/200) in Attack Position. Due to the effect of "Kuribabylon", its ATK is equal to the combined ATK of the "Kuriboh" brothers when they were removed from play ("Kuribabylon": ? → 1500/200). Yami Yugi then activates "Mystical Space Typhoon" to destroy "Gravity Axe - Grarl" ("Guardian Grarl": 1500 → 1000/1000).