The Demon, known as Kaiser VS Edo! Pro-League Battle in the Japanese version, is the fifty-seventh episode of the Yu-Gi-Oh! GX anime.

Zane Truesdale Duels Aster Phoenix in the Pro League, as Duel Academy watches the match on television. Aster unveils his real Deck - one of "Elemental Heroes", just like Jaden Yuki's.

That night, the group gathers inside the Slifer Red dorm to watch Zane Truesdale's next Pro League match. Finding out that Zane's opponent will be Aster Phoenix, Jaden is eager to see what Aster's actual Deck consists of. To everyone's surprise—including Zane's—Aster reveals that his Deck has an "Elemental Hero" theme, similiar to Jaden's. However, when Aster fuses Elemental Heroes "Avian" and "Burstinatrix", he does not Fusion Summon "Elemental Hero Flame Wingman", but "Elemental Hero Phoenix Enforcer". To his friends' amazement, Jaden was unaware that this Fusion Monster even existed. 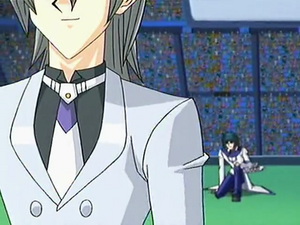 Aster counters nearly every move Zane makes and even causes him to take damage from "Power Bond". The Duel ultimately ends with Aster the winner, much to the shock of all of Duel Academy.

Turn 3: Aster
Aster draws "Pot of Greed" and subsequently activates it to draw two cards. Aster then activates "Polymerization" to fuse "Avian" with "Elemental HERO Burstinatrix" in order to Fusion Summon "Elemental HERO Phoenix Enforcer" (2100/1200) in Attack Position. "Phoenix Enforcer" attacks "Cyber Dragon". Due to the former's effect, it can't be destroyed in battle, so only "Cyber Dragon" is destroyed. Aster then Sets a card.

"Cyber Twin Dragon" attacks "Phoenix Enforcer" again since the former can attack twice during each Battle Phase, but Aster activates his face-down "Elemental Recharge" to increase his Life Points by 1000 for each "Elemental Hero" he controls (Aster 2600 → 3600). The attack continues, but "Phoenix Enforcer" is not destroyed due to its own effect (Aster 3600 → 100). During the End Phase, the final effect of "Power Bond" activates, inflicting damage to Zane equal to the original ATK of "Cyber Twin Dragon" (Zane 4000 → 1200).

Turn 5: Aster
Aster draws "Elemental HERO Sparkman" and subsequently Normal Summons it (1600/1400) in Attack Position. He then activates "Spark Blaster" and equips it to "Sparkman". Now during each of Aster's Main Phases, he can change the battle position of one monster on the field. If Aster uses this effect three times, "Spark Blaster" will be destroyed. Aster then activates "Guard Penalty". Now for this turn only, Aster can draw a card each time a monster is switched to Defense Position.