No Pain, No Game, known as Hell Kaiser Ryo! Chimeratech Over Dragon in the Japanese version, is the sixty-fifth episode of the Yu-Gi-Oh! GX anime.

Zane Truesdale is offered a chance to regain his glory in the Pro-Dueling circuit through Underground Duels and has a drastic change of heart about Dueling, abandoning respect for sheer victory.

Following his loss to Aster Phoenix during episode 57, Zane Truesdale has fallen into a slump and has been unable to win a Duel since. He is approached by a manager named Mr. Shroud, who offers to help him reclaim his former glory, telling him he must start at the bottom.

He means this literally, as Zane ends up Dueling Mad Dog in a caged underground Dueling arena. Both Duelists wear shock collars that render damage to Life Points as actual pain. During the Duel, Zane admits that he is tired of losing and now believes that his former philosophy of respecting his opponent is flawed. He simply wants to win. Though he is losing badly the entire Duel, Zane wipes out all 15,000 of Mad Dog's Life Points in a single turn with "Chimeratech Overdragon".

Turn 1: Mad Dog
Mad Dog draws. He then Normal Summons "Acid Slime" (800/1000) in Defense Position. When this monster is destroyed in battle and sent to the Graveyard, Zane will take 800 damage. Mad Dog then Sets a card.

Mad Dog then activates his face-down "Last Machine Acid Virus" to Tribute "Acid Slime" and destroy all Machine-type monsters on Zane's side of the field and in his hand, as well as any Machine-type monsters that he draws during his next three turns. For each monster destroyed this way, Zane will take 500 damage. "Cyber Dragon" is destroyed (Zane 4000 → 3500).

Turn 3: Mad Dog
Mad Dog draws "Contingency Fee" and subsequently activates it to force Zane to draw until he has six cards in his hand and increase his (Mad Dog's) Life Points by 1000 for each card Zane draws. Zane draws three cards (Mad Dog 4000 → 7000). Due to the Lingering effect of "Last Machine Acid Virus", Mad Dog is permitted to see the cards Zane drew to check for Machine-types. The cards drawn are "Card from a Different Dimension", "Battle Fusion", and "Damage Polarizer".

Turn 4: Zane
Zane draws "Future Fusion" and subsequently activates it to send two "Cyber Dragons" from his Deck to the Graveyard and Fusion Summon "Cyber Twin Dragon",[Notes 1] but the Summoned monster won't be allowed to attack the turn it's Summoned. Mad Dog then activates his face-down "Jammer Slime" to negate the effect of "Future Fusion" and destroy it by discarding "Draw Slime". Since "Draw Slime" was sent to the Graveyard, its effect activates, letting Mad Dog draw one card.

Mad Dog then activates his face-down "Despised Reality", which gives Zane two options. The first will let Mad Dog draw two cards in exchange for Zane being permitted to Special Summon a Level 4 or below monster from his Deck. If Zane does not choose this option, then Mad Dog will take 1000 damage during the End Phase. Zane selects the first and Special Summons "Proto-Cyber Dragon" from his Deck (1100/600) in Attack Position, so Mad Dog draws two cards.

Mad Dog's voice in the dub appears to be a parody of Mike Tyson.

When Zane activates "Overload Fusion", the final card shown on the left as his Deck is fanned out in front of him is shown to be "Kuriboh" in the English version. In the Japanese version, the picture of said card is obscured, but it is an EARTH-attribute monster. 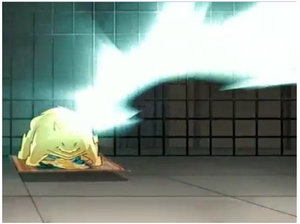 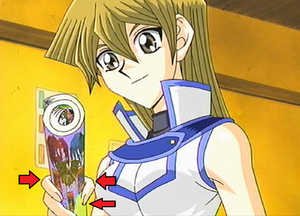 The arrows point the Japanese cards in the Dub.