Just when Yako finally seems to have won, Dark Yugi calls out "The God of the Obelisk" to face the "The Wicked Avatar". Yugi plays "Divine Evolution", evolving "Obelisk" into a greater form.

As Yako and Dark Yugi face-off, Gekko, Kaiba, and Willa watch. Kaiba turns to Gekko, pointing out that the last time he saw Yako Duel before today, he only had originality, but now he's become a formidable Duelist. Gekko acknowledges this, and Kaiba asks him what Gekko thinks made Yako this strong. He thinks that it seems as though the Wicked Gods were nothing more than the trigger, as Gekko and Willa looks at him in surprise, and Kaiba further explains that his power is based on rage, because of his feelings of inferiority toward Gekko. Gekko is shocked that Yako felt inferior to him, and Kaiba states that he doesn't know whether that should make Gekko happy or sad. Gekko bows his head in shame.

Yako tells Yugi to sink into deepest darkness, and Dark Yugi tells him to bring it. Yako declares the direct attack of "The Wicked God Yugi," and "The Wicked Avatar" charges forwards, reaching out. Yako thinks that if the attack goes through, he'll be the world's greatest Duelist. Dark Yugi retorts that he isn't beaten yet, activating his Trap Card, "Shadow Guardsmen," which Summons two "Guard Tokens" in Defense Position (with 1 ATK and DEF.) He explains that the "Guard Tokens" will stop all damage from the attack and that he won't be hurt at all. Kaiba thinks "No! Wait!" as Yako yells that it's useless. Yugi can't stop the Wicked God with that stupid card. He reveals his own face-down card, "Berserk Mode," switching Dark Yugi's "Guard Tokens" to Attack Position. He warns Yugi not to even think about using some stupid face-down card to undo his card, save his "Guard Tokens," and run away. He will die on this turn. Dark Yugi chuckles, and smiles, reassuring Yako that he won't run away from his battle.

Kaiba knows what Yugi's up to. He tells Gekko that he knows he cares about his brother, so Gekko won't like to see him defeated in the most humiliating way possible. But unfortunately for Yako, Yugi has a sword, a sword Kaiba gave him. A sword of incredible power. Yelling to Yugi, the CEO of KaibaCorp tells him that he gave him a sword, now use it and slay the Wicked God. Dark Yugi replies in the affirmative, thinking that that card is already... Telling Yako to get ready, he activates his face-down Spell-Card, "Monster Reborn." As Gekko and Yako gasp, a massive form rises out of the ground behind Dark Yugi, as he tells "The God of the Obelisk" to come forth. The powerful Egyptian God looks down upon Yako as "The Wicked Avatar" immediately begins to dissolve. Kaiba smirks, as Gekko thinks that this is Yugi's God. Yako winces, wondering if Yugi sent his God to the Graveyard when he Summoned "The Tricky". Then he grins, so what? he asks.

Even if it's a God, his Wicked God will take its shape. "The Wicked Avatar" finishes reforming into the massive form of "Obelisk," as Yako tells Yugi to look well upon the one that surpasses his God, The Wicked God Obelisk. Gekko gasps as "Avatar's" ATK rises to 4001, against the power of "The Wicked Avatar," even the power of "Obelisk the Tormentor" isn't enough. He thinks that Yugi should have just let the "Guard Tokens" take the attack, but Kaiba tells him not to underestimate "Obelisk." Even on the opponent's turn, "Obelisk" can use its ultimate ability to attack. As he muses on the ultimate power of "The God of the Obelisk," Dark Yugi proceeds to activate that ability, "Soul Energy Max," sacrificing his two "Guard Tokens," which are enclosed in a sphere, causing lightning to flow into "Obelisk's" head. Dark Yugi explains that by offering two sacrifices to "Obelisk" he raised his ATK to infinity. You can't add to or subtract from infinity, which means "Avatar's" "plus one" is useless.

Yako calls Yugi a fool, he can't beat him like that. The Wicked God's ATK just rose to infinity as well. And that's not all. Yugi's "Obelisk" and his Wicked God are of different ranks in the Divine Hierachy. Right eye bulging, Yako reminds him that any attack from a low-level God like that will be null and void. He laughs madly as Gekko says Yugi's name. Dark Yugi looks down at him, and tells Gekko that he's going to defeat Gekko's brother. Gekko looks at the ground, musing on the chain of hatred inside Yako, and then he looks back up, telling Yugi to do it. If it's Yugi, Gekko know's he'll be able to stop Yako. Yako angrily yells at his Wicked God to attack, and shatter "Obelisk." "The Wicked Avatar" charges forwards with its mighty fist levelled. Dark Yugi grins, pointing out that Yako said their God's ranks were different, but the divine rank of "Obelisk" has been raised by Gekko, Yako's brother. 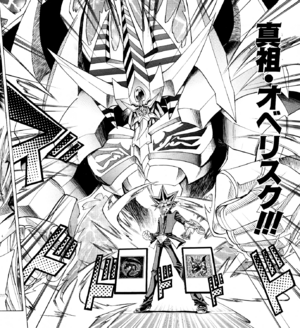 "Obelisk The Progenitor" is created.

Dark Yugi then activates his third face-down card, and Yako recognizes it as Gekko's card in shock. Dark Yugi explains that thanks to "Divine Evolution," "Obelisk the Tormentor" will ascend to a higher level. "Obelisk" hunches over in a similar position to the image on the card, as it gains size, and is marked with dark blue markings, becoming more angular - "Obelisk The Progenitor." Yako is horrified. This can't be, he protests. How did Yugi... Dark Yugi tells Yako that this is it. He orders "Obelisk the Progenitor's" "God Hand Impact." Clasping its hands together, "Obelisk the Progenitor" concentrates colossal amounts of energy around its fists, and charges at "The Wicked Avatar" (which appears to still only be mimicing the base form of "Obelisk"). "The Wicked Avatar" performs its own "God Hand Impact," and the two mighty God monsters clash, causing a massive shockwave of energy to erupt from the top of the KaibaCorp building and brighten the sky.