Kaiba confronts Yako in order to take back KaibaCorp, gaining an early advantage.

Willa Mette lies on top of the KaibaCorporation Building, but is roused from his rest by the activation of a panel near Kaiba's fighter jet. Getting up, he wonders what's going on, before there is a burst of light. Laughing, he comments that that is something as he sees Seto Kaiba and Yako Tenma standing on top of a Duel Field that has been elevated from the inside of the building. Kaiba looks down at Willa in disdain, asking if he's still here. He can't believe that Yako has been letting goons like him overrun his building, and he's so furious he doesn't know where to start. Yako replies that even as he rages, his Project is nearing completion. If Kaiba is a Duelist, he cannot defy the laws of power. In other words, Kaiba doesn't have what it takes to stop the Project. Kaiba angrily asks if Yako's saying that Kaiba will lose to him, but Yako doesn't reply, and Kaiba tells him that getting the Wicked Gods has bloated his ego. If he's truly worthy of owning a God, then he should prove it, and show it to him. After he tears Yako apart, he and his Gods will grovel at his feet. Yako laughs softly, and Kaiba vows to reset his entire Project to zero, as the Duel begins.

Kaiba starts, Setting a card and Summoning "Material Bat" in Defense Position to end his turn. Yako chuckles as he begins his turn, but only Sets two cards and ends his turn without Summoning a Monster. Willa wonders what's up with Yako, is it card trouble? Kaiba wonders the same thing, or is Yako laying a trap? He draws, Summoning "Material Lion" and attacking directly, thinking that Yako's Traps don't scare him. "Material Lion" successfully attacks with "Scratch Claw," reducing Yako to 2200 Life Points. Kaiba is shocked that Yako didn't take any steps to protect himself, taking all the damage instead. He comments that Yako didn't activate a Counter Trap Card when he Summoned his monsters or when he attacked. He takes it that means those face-down cards of Yako's are an empty bluff. Yako replies that they'll see.. Frowning, Kaiba Sets a card to end his turn. As Yako draws, Kaiba wonders what his strategy is. Yako simply Sets another card and ends his turn. Kaiba is floored, and Willa comments that Yako's got guts. He wonders if he's using Spell and Trap cards without monsters. Playing against such a Deck can be tricky, but he can't see it working on Seto Kaiba. Kaiba has come to the same conclusion, and thinks that it's absurd that Yako is using a Traps-and-Spells Deck against him. He looks at the "Blue-Eyes White Dragon" in his hand, thinking that he won't even have to use his trump card. He'll finish him off this turn. 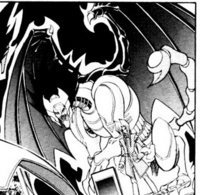 The copy of "Mosaic Manticore".

Drawing, he Summons "Material Scorpion," and Yako realizes what Kaiba's about to do. Since Kaiba has three "Material" monsters on the field, he can fuse them into one Chimera. Yako realizes that it's an "automatic unit" self-fusing monster, and Kaiba fuses his three monsters into the mythical beast, "Mosaic Manticore". Yako activates a Trap, and another "Mosaic Manticore" appears on his field. Yako explains that his "Chronic Déjà Vu" Trap card Summoned a monster identical to the one that Kaiba just Summoned. Kaiba appears to be stuck, thinking that if he attacks, both monsters will be wasted and will end up destroying one another. But then he laughs, asking Yako if he thought such makeshift tactics would work on him. He plays his Field Virus Card, "Alpha-Wave Emission," draining 300 ATK from every monster on the field and preventing them from attacking. Both "Mosaic Manticores" fall to 2500 ATK, as Yako points out that that goes for Kaiba's Manticore as well. Kaiba just laughs, playing "Vaccination" to vaccinate his "Mosaic Manticore" and make it immune to the Virus. He orders his "Manticore" to attack with "Fire Breath" and destroys Yako's "Manticore," reducing Yako to 1900 Life Points. Laughing, Kaiba admits that when "Mosaic Manticore" is destroyed, part of the Summoning Material remain on the field. "Material Lion" and "Material Bat" are on Yako's field, as Kaiba further explains that a Chimera is any kind of monster created from other parts of animals. He could Summon another "Material" monster and fuse them into a Chimera again, but Yako doesn't have any "Material" monsters, does he? He tells Yako to draw. Yako does so, sacrificing his two "Material" monsters to Summon "Belial - Marquis of Darkness." Its effect prevents Level 7 or lower monster cards from attacking it, preventing the Fusion of Level 4 monsters from attacking it. Kaiba comments that he sees. So this is all Yako is worth as a Duelist. Yako is surprised as Kaiba asks if he thought that he could beat him with such a half-baked strategy.

Kaiba draws, commenting that the card he needs to crush Yako is already in his hand, and sacrifices two of "Mosaic Manticore's" component parts ("Material Bat" and "Material Scorpion") to Summon his "Blue-Eyes White Dragon." It inherits the vaccine given to the sacrificed "Mosaic Manticore" and is unaffected by the Virus, allowing it to attack and destroy "Belial" with "Burst Stream of Destruction," reducing Yako's Life Points to 1400. Kaiba tells Yako that he isn't qualified to possess a God, and tells him to leave his God cards and get off his property now.

Turn 6: Yako
Yako Tributes "Material Bat" and "Material Lion" to Normal Summon "Belial - Marquis of Darkness" (2800/2400), whose ATK decreases by 300 via "Alpha-Wave Emission". The effect of "Belial" may negate the attacks of any monsters below Level 8.

Turn 7: Kaiba
Kaiba undoes the fusion of "Mosaic Manticore" and Tributes 2 of its materials, "Material Bat" and "Material Scorpion", to Normal Summon "Blue-Eyes White Dragon" (3000/2500) in Attack Position. The effect of "Vaccination" allows him to transfer its effect to "Blue-Eyes", who also becomes unaffected by Virus Cards. "Blue-Eyes" attacks and destroys "Belial" (Yako 1900 → 1400).