"A World Ruled by Terror!!" is the tenth chapter of the Yu-Gi-Oh! R manga. It was first printed in Japan on January 20, 2005 in the V Jump magazine. It was later reprinted in Volume 2 of Yu-Gi-Oh! R.

Yugi's Duel with Yako continues as he opposes "The Wicked Dreadroot" with "Arcana Knight Joker".

In the hallways of the Kaiba Corporation Building, Jonouchi and Honda hear a noise that they think is one of Yugi's God cards. Honda is shocked that Yugi's opponent is of the strength that would force Yugi to Summon one of the God cards, and they decide to hurry up and get up there. Jonouchi thinks that Yugi had better win this one.

Yako Tenma, wearing his normal attire, laughs as he stands in front of Anzu's body, trapped in his machine and glowing with light. He comments on the energy, stating that the Project has just advanced to the next stage. He tells the "Evil God" to come forth and unleash its full power.

In the theatre, "The Wicked Dreadroot" emerges from a blaze of power behind Yako. Dark Yugi is horrified to see that there is another Evil God besides "The Wicked Avatar"; "The Wicked Dreadroot." Yako, who had had his hand clasped over his heart when the monster was Summoned, orders it to destroy him. "Dreadroot" attacks with "Fear's Knockdown", launching a punch, and Yugi activates his Set card, "Lightning Blade", which increases the ATK of "Valkyrion the Magna Warrior" by 800. But despite the attack point boost, "Dreadroot" destroys "Valkyrion" with a single blow, much to Yugi's horror. Yako thinks that "The Wicked Dreadroot" is the root of all terror, explaining that "The Wicked Dreadroot" spreads an aura of fear wherever it goes, halving the ATK and DEF of all monsters except Evil Gods. "Lightning Blade" had only boosted "Valkyrion" to 2550 ATK, leaving Yugi with 1550 Life Points. Yako Sets a card, and ends his turn, telling Yugi to fall on his knees before the terror of the Evil God.

Yugi thinks to himself "what a monster", before correcting himself that it's a God, and an Evil God at that. It has 4000 ATK, and no matter what he Summons, the ATK and DEF of the monster will be cut in half. Thinking that he can't defeat it with the three cards in his hand, he draws, beginning his turn. Yako chuckles, asking Yugi if he really thinks that he can defeat a God of evil. He comments that Yugi had better Summon a monster for defense at least, or he'll win on the next turn. Yugi thinks that all he can do now is pin his hopes on this card, and activates it - "Card of Sanctity." They both draw cards until they are holding six, and Yugi looks at his new hand, thinking that he can do this. He Sets two cards, and then sends a card from his hand to the Graveyard to Special Summon "The Tricky" in Defense Position. Yako laughs, commenting that "The Tricky" may be a Level 5 monster, but with its DEF cut down to 600, it'll barely last the round. Yugi can struggle all he wants, it's useless, as there is no card in existence that's a match for his God. 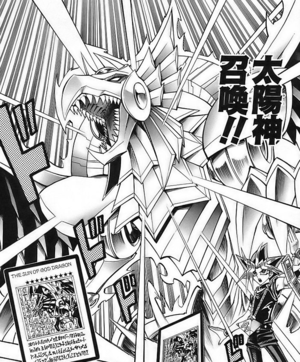 Chuckling, Yugi muses that he wonders - there's one type of card that the "Dreadroot's" pwoer doesn't affect, and maybe one of those cards might be able to take Yako down. Yako is startled, realizing that Yugi has figured it out, and then realizes in shock what the card Yugi sent to the Graveyard to Summon "The Tricky" is. Yugi tells Yako that he's coming, and activates "Monster Reborn". He revives "The Sun Dragon Ra" and the golden dragon appears behind him. Yugi tells Yako that this is the most powerful of the Egyptian God cards - the Winged Dragon of Ra!

And then "Ra" begins to vanish, shredding in wisps of smoke, much to Yugi's shock and horror. He calls Yako scum, as Yako reveals that he had activated "The Selection", which allowed him to negate the Summon of "Ra" because he already controlled a God himself. He points out that Yugi is right, the only type of card that is not affected by "Dreadroot" is a God card. Once it is Summoned, it is truly a God, with absolute control over the world, but before it is Summoned, it's only a card. As long as he doesn't let Yugi Summon one, he doesn't have a chance of fighting his Evil God. He bursts into insane laughter, and Yugi realizes that Yako really is a good Duelist. At the sideline, Croquet claps his hands, thinking that this is perfect. Yugi may have conquered Duelist Kingdom and Battle City, and is truly an elite Duelist, but of all the Duelists raised by Pegasus, Master Tenma was the only one he called "perfect". He thinks that the outcome of the Duel is clear. 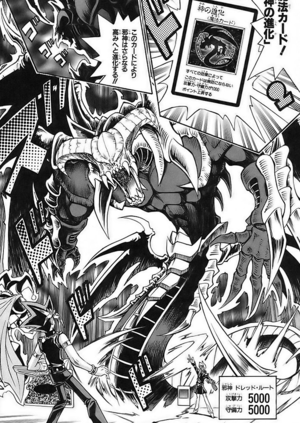 Yako begins his turn, drawing his card and thanking Yugi for allowing him to reinforce his hand back there - as a result, this card found its way to him. He plays the Spell Card, "Divine Evolution", which allows his Evil God to become even stronger. "Dreadroot" changes form, gaining a snake trunk instead of its legs, the skull around its face becoming elongated, and its fingers, neck and bone spurs all lengthening as its ATK and DEF increase by 1000 points, to 5000 each. Yako admits that in general, Spell cards will only last one turn on Gods, but "Divine Evolution" is an exception, and no card can stop it. Yugi realizes that the card was designed just for God cards, and wonders if there's a chance he could lose. Yako thinks that that's right: faced with an Evil God, Yugi's body will freeze with terror, and there isn't a glimmer of hope. He Sets a card, and then attacks "The Tricky" with "Dreadroot." But the attack doesn't connect - "The Tricky" has disappeared. Yako comments that Yugi is a very poor loser; here he is, kindly trying to release him from the terror of the Evil God by defeating him, what other way is there? Yugi reveals his Set card was "Soul Barter", allowing him to switch "The Tricky" with the "Queen's Knight" in his Graveyard. Yako realizes that by switching monsters, he escaped the Jashin's attack, but it will only delay his defeat by one turn. Dark Yugi tells Yako that he's not going to fall on his knees before the Evil God; he has to beat him and save Anzu.

He refueses to lose. He begins his turn and draws, then Sets another card face down and Summons "King's Knight", then uses its effect, as the "Queen" and "King" are both on the field to Summon "Jack's Knight." Yako asks if Yugi's planning to Summon a God card again, pointing out that it will only work if all three monsters last through to the next turn. Yako thinks that even if he does, he can reactivate "The Selection" with "Trap of Darkness" and destroy the Summoned God once again. Yugi chuckles - he guesses that Gods must be a pretty big deal. He plays "Polymerization", fusing the Three Musketeers of Face Cards into "Arcana Knight Joker." As the monster appears, Dark Yugi thinks that his fighting spirit will overcome fear.

Turn 7: Yugi
Yugi draws. He then activates "Card of Sanctity", letting both players draw until they have six cards in their hands. Yugi then Sets two cards and Special Summons "The Tricky" (2000/1200) in Defence Position via its own effect by discarding a card ("The Winged Dragon of Ra"). Yugi then activates "Monster Reborn" to Special Summon "The Sun Dragon Ra" from his Graveyard (????/????), but Yako activates his face-down "The Selection", negating the Summon as there is another Divine-Beast-Type monster on the field.

Turn 8: Yako
Yako draws. He then activates "Divine Evolution", increasing the ATK and DEF of "The Wicked Dreadroot" by 1000 ("Wicked Dreadroot": 4000 → 5000/4000 → 5000). This card also increases its ranking on the Divine Hierachy, though this effect is not revealed until far later. Yako then Sets "Trap of Darkness". "The Wicked Dreadroot" attacks "The Tricky", but Yugi activates his face-down "Soul Barter", negating the attack, sending "The Tricky" to the Graveyard and Special Summoning "Queen's Knight" (1500/1600) from his Graveyard in Attack Position. During the End Phase, the effect of "Dreadroot" would return its ATK and DEF to normal, but the effect of "Divine Evolution" prevents this.