"A Wicked Shadow!" is the first chapter of the Yu-Gi-Oh! R manga. It was first printed in Japan in V Jump magazine on April 21, 2004. It was later reprinted in volume 1 of Yu-Gi-Oh! R.

The chapter begins at the end of Battle City, where Dark Yugi has finally defeated Dark Marik with "Dark Magician" and "Dark Magician Girl". A shadowed, long-haired figure surveys the duel on a monitor in a room full of computers and screens. He addresses his "master", stating that something is "about to begin" as he holds a card with Pegasus's image on it, and says that Yugi has to pay for taking everything from him.

The scene then shifts to the Kaiba Corporation head office, where the computer system that governs the Duel Disks is being hacked: the 13th wall has fallen, access to communications is denied so no one can inform Seto Kaiba, and the final barrier between the hacker and control of the computer is 70% compromised. Isono tells the staff to cut the power supply and halt the system, despite warnings that this would shut off all Duel Disk systems worldwide; Isono decides it's better than the alternative and repeats the order. To their shock, even this fails, and the hacker suddenly reveals himself: the shadowed figure from before appears next to Isono and commenting that he's a little too late. A hologram of the long-haired man man in expensive clothes appears, accompanied by many other less-distinct figures and declares that KaibaCorp is being taken over by the Asian division of Industrial Illusions (I²). He floats towards the Duel Ring server computer and claims it in the name of his 'master', all the while thinking to himself that Yugi will soon be next.

Over at Domino High School, Yugi Mutou looks outside a window as Katsuya Jonouchi, Anzu Mazaki and Hiroto Honda are about to head home. As Yugi gets up to join them, he suddenly hears his name called from the desk he had left; the image of the KaibaCorp hacker begins to emerge from within the desk, causing Jonouchi to freak out. The hacker introduces himself as Yako Tenma of Industrial Illusions, which Jonouchi claims he hasn't heard of; Honda and Anzu have to remind Jonouchi of what transpired at Duelist Kingdom. Yako challenges Yugi to a duel, intending to "punish" him by defeating him, and floats through the ceiling to await him on the roof.

When Yugi and company finally meet Yako on the school's roof, Yugi observes that Yako is not really there, causing Jonouchi to mistake him for a ghost; Yugi clarifies that the "Yako" they see is an illusion created by Kaiba's solid vision system. Yako congratulates Yugi on his keen analysis, but says that Yugi cannot maintain his title as the Duel King without accepting challenges. He holds up a card that he says won't let Yugi off easily either, claiming it to be invincible. Jonouchi almost approaches Yako, but Yugi stops him and switches to Dark Yugi, who accepts Yako's challenge while suspecting that he is plotting something.

As the duel begins, the real Yako is shown with a machine over his head, musing that Yugi will experience divine punishment at the hands of a God card stronger than the Egyptian Gods - one that he calls "Wicked Avatar".

Some turns into the duel, both players control three monsters, with the "Magnet Warrior" trio of "Alpha", "Beta" and "Gamma" on Yugi's field, and three unnamed monsters on Yako's field. On Yugi's turn, he Tributes his three monsters to Summon "Slifer the Sky Dragon", and Yako's expression becomes a sinister smile as "Slifer" attacks and destroys one of Yako's monsters. Though Yugi's friends cheer ecstatically, Yako is unconcerned, and resolves to show Yugi not only his power, but his God as well. On his turn, Yako revives his destroyed monster with "Silent Doom", then Tributes his three monsters to Summon "The Wicked Avatar", which appears as a black orb before transforming into a black-colored version of "Slifer". 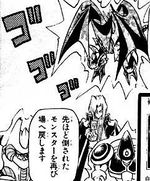 Yako's turn
Yako activates "Silent Doom", Special Summoning the monster that "Slifer" destroyed from his Graveyard. He Tributes his three monsters to Summon "The Wicked Avatar" in Attack Position