From Yugipedia
(Redirected from Eye of Anubis Hologram)
Jump to: navigation, search

Security foil[1] is a holographic foil square placed at the bottom-right of almost all Yu-Gi-Oh! Official Card Game and Trading Card Game cards from Series 2 onward. It contains a hologram with the Eye of Anubis logo[2] and the word "Yu-Gi-Oh!"

Security foil was first used in the first Series 2 set, the OCG set Magic Ruler, which was released on April 20, 2000.

All officially released TCG and OCG cards, except Series 1 cards (which were only released in the OCG) and the Duelin' Monsters Giveaway promotional card, have the security foil. Cards sent to stores for demonstration purposes rather than public distribution (such as the Demo Speed Dueling kit) do not always include the foil, as counterfeit protection is unnecessary for cards that are not intended to be in circulation. Official Proxy images of cards do not accurately reproduce the foil, either excluding it entirely or replacing it with a solid-colored square. 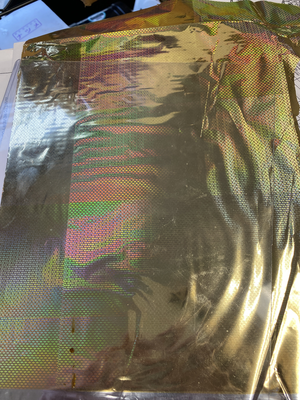 An uncut sheet of security foil from the UDE era

Security foil consists of a solid-colored background, on which rows of Eyes of Anubis and the text "YU-GI-OH!" are printed in holographic lettering. However, starting around 2017 with the debut of the Code of the Duelist booster pack (August 4, 2017), very small holographic stars are also evenly interspersed across the hologram. The Eyes and the text are visible from a range of lighting and viewing angles, but the stars are only visible from very specific angles.

The foil is printed directly on the card; contrary to its appearance, it is not a sticker. The foil is so thin that it should not be possible to feel by running a finger over it — this is often not the case for counterfeit cards.[2]