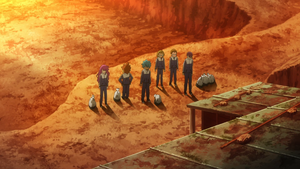 Yuga Ohdo and his friends at the Abandoned Dorm.

The Abandoned Dorm is a setting in Yu-Gi-Oh! SEVENS. It is a cabin owned by Goha #6 Elementary's Heavy Cavalry Duel Club on the outskirts of Goha City, which they use to punish rule-breakers while also providing a place for entrants to the club to learn. The Dorm also serves as one of the entrances to Maximum Mountain.

Following Yuga Ohdo's use of Kaizo to place Roads around Goha #6 Elementary that aided students in completing the exhausting morning ritual, Asana Mutsuba sent Yuga and his friends to the Abandoned Dorm as punishment for "mocking" the traditions of Goha 6th. In reality, Yuga had done so with the express intention of being sent to the Abandoned Dorm and the entrance to the Mutsuba mine it contained.[1] Once there, Yuga sent Kaizo and Seatbastian to Nail Saionji to ask where Asana had obtained her Maximum Monsters, while also intending for their escape to be discovered so that they in turn could flee into the mine. Galian Townsend also joined them in their labors after his Heavy Cavalry GG03 was destroyed, intending to resume from the beginning in the club. Yuga's plan succeeded, and he, Lucidien "Luke" Kallister, Romin Kassidy, Gavin Sogetsu and Rayne and Rino all escaped into the mineshaft.[2]

Following the conclusion of their battles with the Heavy Cavalry Duel Club, Luke brought Tracker with him to the Abandoned Dorm to ask Asana for permission to dig in the mine, then termed "Maximum Mountain". His request was stymied by Goha #5 Elementary's Space Operations Duel Squadron, who had witnessed Asana's creation of her Maximum Monsters and wished to excavate in the mine as well. Asana had Luke and the club's leader, Braun Honya, Duel for the right to excavate in the mine; Luke eventually won the Duel, but allowed Braun and his friends to excavate with him, Romin and Gavin once Asana gave them permission.[3]

During the Goha Rush Duel Team Battle Royal Goha 66 entered the mine by forcing open the entrance at the Abandoned Dorm. Asana and Caterpillio Zomyoji waited at the Dorm for reinforcements from Galian, Chevelle Kayama and Trapigeon, venturing into the mine to confront Goha 66.[4] Once they had, Kaizo, Tyler Getz and Toombs lay in wait at the Abandoned Dorm for Luke, Romin, Gavin, Saburamen, Briscoe and Sushiko Maki.[5]