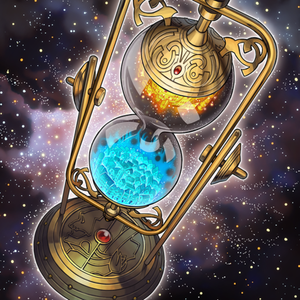 Beckon "Demise, King of Armageddon" and "Ruin, Queen of Oblivion," who ply their destruction with different effects.

Draw a black curtain on the world with their powers of destruction!

Ruin and Demise is the fifth Solo Mode Gate in Yu-Gi-Oh! Master Duel, and focuses on the Ruin & Demise card set.

Like most Gates in Solo Mode, each Duel can be played with either the player's own Deck or a provided Loaner Deck fitting the theme of the Gate, with separate rewards for each. Completing this gate for the first time unlocks the Miraculous Advent Secret Pack for 24 hours.

Learn the ins and outs of the "Demise" & "Ruin" Decks.

This chapter serves as a tutorial for using Ruin & Demise.

A well-balanced Deck that focuses on the "Demise" and "Ruin" monsters. Choose which one to Ritual Summon wisely based on how your opponent is Dueling. Use cards like "Pot of Extravagance," "Manju of the Ten Thousand Hands," and "Pre-Preparation of Rites" to find the cards you need to Ritual Summon!

A Deck that focuses on Ritual Summoning "Demise, King of Armageddon" and "Ruin, Queen of Oblivion." An important tactic is to use cards like "Witch of the Black Forest" and "Sangan" to add "Senju of the Thousand Hands" and "Sonic Bird" to your hand. These cards can help you find the cards you need for Ritual Summoning.

A Deck for bringing out the "Demise" Ritual Monsters. When you clear your opponent's field with "Demise," keep your guard up for any counterattacks. Protect yourself from your opponent's powerful attacks with "Draining Shield" to increase your Life Points so you can use the effect of "Demise" on your next turn.

A Deck that focuses on LIGHT Fairy Ritual monsters such as the "Ruin" monsters, "Vennu, Bright Bird of Divinity" and "Cyber Angels." Regain your standing with "Ritual Sanctuary," which allows you to return Spell Cards from the Graveyard to your Deck and Special Summon LIGHT Fairy monsters from your Graveyard.