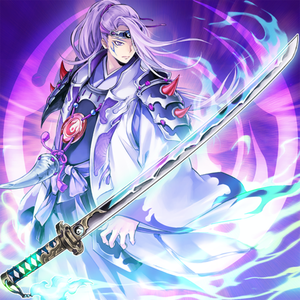 "Shiranui" employ the power of fire to slay Specters. Their power burns fiercely through their Demon Swords and Synchro Summons.

Specter Slaying Flames is the tenth Solo Mode Gate in Yu-Gi-Oh! Master Duel, and focuses on the Shiranui archetype.

Like most Gates in Solo Mode, each Duel can be played with either the player's own Deck or a provided Loaner Deck fitting the theme of the Gate, with separate rewards for each. Completing this gate for the first time unlocks the Fires of This World and The Next Secret Pack for 24 hours.

Learn the ins and outs of the "Shiranui" Deck.

This chapter serves as a tutorial for using Shiranui.

A "Shiranui" Deck that incorporates various Levels of Synchro Monsters and Link Monsters. The Monsters have various effects depending on the conditions, so try to Banish Synchro Monsters to activate their effects.

A Deck that lets you experience the basics of "Shiranui." When you have a Tuner and Non-Tuner Monster, try to Synchro Summon them. Also, if you Banish a "Shiranui" Monster at the right time during the effect of "Sealing Ceremony of Katon" and "Shiranui Spectralsword," it will have an additional effect.

This chapter becomes available after completing the first Duel. It can be unlocked by spending 200 FIRE Orbs.

A "Shiranui" Deck featuring "Vendreads." You can also engage the effects of "Shiranui" Monsters by Banishing them from the Graveyard instead of Tributing them for "Revendread Origin." Try to use it as a comeback move.

A deck that combines "Eldlich the Golden Lord" and its related cards with "Shiranui," which have many ways to support Zombie Monsters. You can also aim to deploy multiple Monsters with high ATK by using "Conquistador of the Golden Land" as a Synchro Material after using its effect.