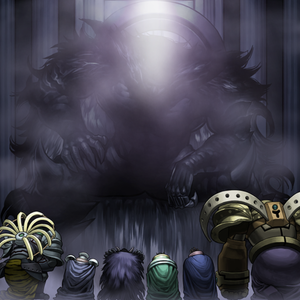 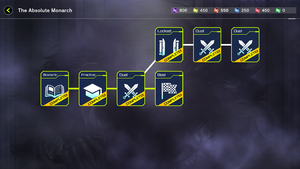 Layout of the completed Gate

The "Monarch," the very embodiment of destruction, obliterate all!

The Absolute Monarch is the third Gate in Solo Mode in Yu-Gi-Oh! Master Duel, and focuses on the Monarch archetype.

Like most Gates in Solo Mode, each Duel can be played with either the player's own Deck or a provided Loaner Deck fitting the theme of the Gate, with separate rewards for each. Completing this Gate for the first time also unlocks the Supernatural Elements Secret Pack for the next 24 hours.

Learn the ins and outs of the "Monarchs" Deck.

This chapter serves as a tutorial for using the Monarchs.

Preserve your hand with Cards like "Thunder Dragon" and "Gather Your Mind" to increase your chances of drawing the powerhouses "Kuraz the Light Monarch" and "Angmarl the Fiendish Monarch." Special Summoning Monsters like "The Tricky" and "Spell Striker" can help you gather Tributes for a Tribute Summon more easily.

A Deck that focuses on Tribute Summoning by Tributing "D.D. Survivor" and "D.D. Scout Plane," Monsters that can be Special Summoned even when they're Banished from the Field. By Banishing your opponent's Cards that were destroyed, you may be able to prevent certain Effect activation conditions from being fulfilled. Make full use of the benefits of "Dimensional Fissure" and "Macro Cosmos."

A Deck that uses "Treeborn Frog" to gather Tributes for Tribute Summoning. Employ various strategies like increasing your opportunities to Tribute Summon with "Card Advance," or activating "Celestial Observatory" to return a Tribute Summoned Level 6 Monster to the Deck to draw more Cards. This can help you get to your most important Cards faster.

A Deck that Summons high-Rank Xyz Monsters by using the Effect of "Illusory Snatcher" to bring out 2 Monsters of the same Level onto the Field upon a successful Tribute Summon. Be aware that you may not be able to Summon some Xyz Monsters depending on the Level and Attribute of the Tribute Summoned Monster.

This Deck uses plenty of "Monarch" Spell and Trap Cards to help you easily Tribute Summon Level 8 Monsters. Make good use of the Spell Card "Domain of the True Monarchs" to not only reduce the Level of a Monster in your hand for easier Tribute Summoning, but also to prevent your opponent from Special Summoning from the Extra Deck!