From Yugipedia
Jump to: navigation, search
This article is about the series of monsters. For the related archetype of Spell/Trap Cards, see "Monarch" (Spell/Trap archetype).

"Monarch" (, Tei) is a series of Level 5 and higher monsters that have effects relating to Tribute Summoning. While it is a series in the OCG/TCG and anime, they function as an archetype under the name "Emperor" in the Yu-Gi-Oh ARC-V manga.

Additionally, there is an archetype of "Monarch" Spells and Traps (e.g. "March of the Monarchs") designed to support Tribute Summons and monsters with ATK and DEF similar to "Monarch" monsters, although they often prevent Summons from the Extra Deck. The artwork of these cards features the evolution of a "Monarch" into their "Mega Monarch" form, and are released in the same sets of their corresponding "Mega Monarch". 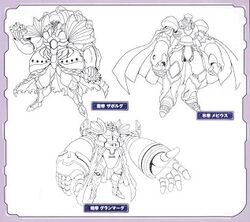 "Monarch" monsters are armored humanoids with large and imposing statures and wearing heavy armor that are colored accordingly to their attribute. Every "Monarch" monster has a large cloak either on its back and/or on its waist (in the cases of "Zaborg" and "Granmarg").

When evolved into their "Mega Monarch" form, each one of them presents similar characteristics to their original forms, with more armor and other changes related to their respective Attributes. Additionally, they are all seen carrying a giant ring on their backs, which is also present with "Ehther" and "Erebus".

In this world, some beings embodied the concept of destruction. Their dignified and appearance and behavior were like those of "Monarchs." No one knew for what purpose the "Monarchs" sought the destruction of the world. They wield their powers and reduce everything in their sight to nothingness. Thunder booms before them, and trees turn brittle. They boil the mountains and crack the earth. They conjure storms and submerge all in fathomable darkness. The world steeped in turmoil and rage, subsumed by violence. And when there is nothing more to destroy, they move to the next land, searching for further destruction. All that witness this great destruction shudder in fear. It is fate for any unfortunate enough to be in their path to disappear in an instant.

And—among the destroyers of this world, there is an Alpha. Its overwhelming power of intimidation lays other destroyers prone, and it possesses untold strength. "Erebus, the Underworld Monarch"

"Erebus, the Underworld Monarch" sits on his throne in the darkest of darkness, looking on at the destruction of the world as if it were the most natural thing.

The advances of the Monarchs, who embody the very concept of destruction, continue. How many countless worlds must they have destroyed? Lightning storms, blizzards, lava, and seismic catastrophy [sic]. All manners of destruction assail the world. As they advance, the Monarchs grow ever stronger, perpetually pushing the boundaries of destruction. Their power defiles all matter equally. There is no way to discern whether or not the Monarchs are aware of what they destroy. They advance, thoroughly expunging all that enters their field of vision, no matter the scenery.

However, in a land reduced to rubble, from the heavens descended a Creator.

A savior descended, as if a miracle, to a land awaiting its destruction. Whether this Creator could be counted as one of the Monarchs is unknown. The ground in which the Creator has landed slowly begins to revive. A day will surely come when this land, regenerated by the Creator, will be destroyed again. Nonetheless, with no reward, "Ehther the Heavenly Monarch" filled this ruined world with the light of rebirth.

There is an original "Monarch" monster for each of the main six Attributes. There is also a corresponding "Mega Monarch", "Vassal", and "Monarch" Spell/Trap Card for each.

"Angmarl" is original to the Yu-Gi-Oh! ARC-V manga. Like the original "Monarchs", it has a Trigger Effect that activates when it is Tribute Summoned.

To offset the inherent difficulties and costs associated with Tribute Summoning, "Monarch" support monsters provide easy Special Summons for use as Tributes and additional Normal/Tribute Summons. "Edea the Heavenly Squire" and "Eidos the Underworld Squire" for example form a simple Monarch Tribute engine, as "Edea" can Special Summon "Eidos" from the deck, whose effect in turn gives the player an extra Normal Summon for a "Monarch".

Externally, other popular Tribute Summoning engines for modern Monarch decks include the "Super Quantum Red Layer" engine, who can be Special Summoned from the hand if the player controls no monsters, and can recover a "Red Layer" in the GY back to the hand for reuse. It can be optionally supplemented with "Super Quantum Blue Layer" and "Emergency Teleport".

Domain Monarch decks, which have an empty Extra Deck, focus on quickly gaining access to "Domain of the True Monarchs" and Tribute Summoning 1 Monarch, in order to enable the floodgate effects of "Domain" and prevent the opponent from summoning from the Extra Deck, a powerful floodgate against many decks.

Extra Deck Monarch decks utilize the Extra Deck in addition to standard Monarch support, providing additional combo plays and disruptions. There are many variants of Extra Deck Monarchs, and a popular variant is "Isolde Monarch", who uses a Warrior engine to turbo out "Isolde, Two Tales of the Noble Knights" in order to gain massive advantage. "Isolde" can search "Kuraz the Light Monarch", mill "Restoration of the Monarchs" to be used as cost for "Monarch" Spell/Traps in the GY, and Special Summon "Edea the Heavenly Squire" from the Deck.

A specialized variant of the Monarch deck focusing on resolving the effects of "Zaborg the Mega Monarch". "Zaborg the Mega Monarch", if Tribute Summoned, can destroy itself to send up to 8 cards from both players' Extra Decks directly to the Graveyard. This effect not only decimates the opponent's Extra Deck, potentially derailing their entire game plan, but can also be used to either grant the player a massive boost in card advantage by sending Extra Deck monsters with advantageous GY effects to the GY (e.g. "Herald of the Arc Light"), or set up summons of hard-to-summon Fusion monsters by sending their Fusion Materials to the GY then Fusion Summon with a GY Fusion Spell (e.g. "Dragon's Mirror", "Miracle Synchro Fusion").

Additionally, these decks would typically also send "Predaplant Chimerafflesia" to the Graveyard with the effect of "Zaborg", as it can search "Miracle Synchro Fusion" if sent to the GY.