"Champion vs. Creator, Part 2", known as "Kaiba Falters! Invincible Toon World" in the Japanese version, is the twenty-seventh episode of the Yu-Gi-Oh! anime. It first aired in Japan on October 24, 2000 and in the United States on May 25, 2002.

Seto Kaiba ultimately loses his Duel against Maximillion Pegasus, who extracts his soul for one of his "Soul Prison" cards. With that, Yugi Muto vows that all the harm Pegasus has caused will be undone when Pegasus is defeated.

Kaiba abandons his hand, and starts Top-Decking. He Summons "Blue-Eyes White Dragon" and uses it to attack "Blue-Eyes Toon Dragon", but the Toon dragon dodges the attack. Pegasus explains that this was based off a concept from Funny Bunny, where the main character of the show, Funny Bunny was able to avoid everything that Ruff Ruff McDogg tried to do in his attempt to stop his cartoony antics.

Kaiba immediately Flip Summons "Swordstalker" and uses it to attack "Dragon Piper", but Pegasus uses "Doppleganger" to activate the effect of Kaiba's "Crush Card" as the effect of "Doppleganger". After "Swordstalker" destroys "Dragon Piper", "Crush Card" destroys virtually all the cards in Seto's Deck. After Kaiba Decks out, Pegasus seals his soul inside a card.

Turn 8: Kaiba
Kaiba draws. He then Sets a monster.

Turn 10: Kaiba
Kaiba draws. He then Sets a card.

Turn 16: Kaiba
Kaiba draws a monster and subsequently Sets it. 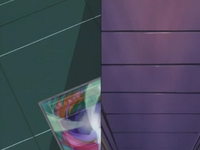 The original artwork and Japanese name of "Negate Attack" are briefly visible in the dub.