Naoki Shima ( , Shima Naoki) is a character appearing in the Yu-Gi-Oh! VRAINS anime. He is Yusaku Fujiki's classmate. When Dueling in LINK VRAINS, he is known as The Brave Battler (Lonely Brave ロンリーブレイブ Ronrī Bureibu, and subsequently Brave Max ブレイブマックス Bureibu Makkusu, in the Japanese version).

Shima loves Dueling, but is not too confident about his skills and had never Dueled in LINK VRAINS, however he eventually overcomes this fear. He is also a fan of Playmaker. He's enthusiastic, passionate, and tries to be friendly with Yusaku. During his observations, Yusaku pointed out that Shima cannot stand being alone.

Shima noticed Yusaku asleep after class had already ended and introduced himself, noting that Yusaku has no friends. He was upset that Yusaku didn't remember him, as they had been classmates for over a month. Shima tried to befriend Yusaku and showed off his new Duel Disk, only for Yusaku to criticize Shima's lack of Dueling talent, but also pointed out that Shima had good intentions. Shima got upset at Yusaku's remarks and stormed off, telling him to Duel by himself. Later he went to watch Duels at LINK VRAINS and was scared when the Knights of Hanoi attacked, and was surprised when "Playmaker" appeared.[2] He then watched the Duel between Playmaker and the Knights of Hanoi with Cal Kolter and was happy that Playmaker won.[3] Sometime later at class, he asked Yusaku if he had seen Playmaker in action before much in which he told no and he was later surprised to see a Knight appearing in Link VRAINS, prompting Yusaku to skip class.[4]

Shima later caught up to Yusaku and assumed he wanted to join the Duel Club. He was then scolded by the club president Hosoda for making so much noise after Yusaku joined another member Sato showed his Duel Disk in which Yusaku pretended to be interested after Skye remarked he knows everything. Yusaku then told that Shima was the one who bragged about it earlier which promote him to tell about how Akira Zaizen had given them all the new Duel Disks, and Skye shot him a stern glare and after Skye saw Yusaku's Deck and was about to hand it to him, but Naoki then snatch the deck from her and laughed how lame it is. Hosoda then scolded him for insulting his Deck and he grimly handed it to Yusaku. The next day at class, he was annoyed that Yusaku was absent and then turned his notepad on and watch the Duel between Blue Angel and Playmaker. He got excited for the Duel and a teacher then told him to be quiet and he apologize to her.[5] When he saw Blue Angel summon "Dark Angel", Shima got scared and screamed, causing the teacher to scold him and as the lesson was going on.[6] 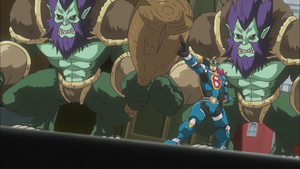 Shima (as The Brave Battler) and two "Green Baboon, Defender of the Forest".

Shima plays a Baboon of the Forest Deck. Based on his comments made during his Duel with a Knight of Hanoi, his Deck contains cards capable of destroying his Beast Monsters, such as "Wild Nature's Release", to trigger the effect of "Green Baboon, Defender of the Forest" to set up a Beatdown strategy.