Clarissa Turner, known as Kyoko Taki (滝 響子, Taki Kyōko) in the Japanese version, is a character appearing in the Yu-Gi-Oh! VRAINS anime. She is a doctor and a member of the Knights of Hanoi, known as Baira (バイラBaira) in LINK VRAINS. 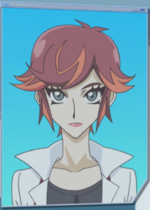 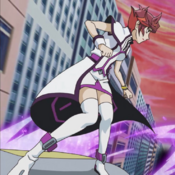 Clarissa is a thin, pale-skinned woman with gray eyes and maroon hair with orange highlights that flicks up at the ends. She wears a white jacket over darker clothing. While she was imprisoned, she wore an orange prisoner's overalls. When she worked with Dr. Kogami, she wore a white lab coat over a light grey collared shirt, and a charcoal jacket when she took care of Ryoken.

As Baira, her hair lengthens slightly down the nape of her neck and becomes spikier. Like Faust and Dr. Genome, she wears a steel eyepiece with a red lens over her left eye, but one with neater curves than her fellow Knights, with a gold line encircling the lens, an "L" shaped line at the base, and three feather-like curves at the eyebrow, in addition to a green gem in the diamond shape over her nose. She also wears a white attire with purple lining and markings, comprised of a sleeveless trench coat over a skirt, a top, a black fastener strip down her chest, a mantle, a detached cuff with on her right wrist, her Duel Disk on the other wrist, stockings, and ankle boots with purple cuffs and short heels. When she uses her Skill, "Malevolent Malpractice", the yellow lines on her eyepiece glow and then shatter, and then the pink portions of her outfit glow.

Her name in LINK VRAINS, "Baira" is similar to a corruption of "virus", though the Japanese term proper differs.

A younger Clarissa working with Dr. Genome, Aso and Kiyoshi Kogami on the Ignis project.

Clarissa aided Kiyoshi Kogami with his Ignis project, alongside Aso and Dr. Genome.[3] She was uncomfortable with the experiments that they put the kidnapped children through.[4] Clarissa and Aso acted as older sibling figures to Kogami's son, Ryoken.[5] After Kogami's death, the three helped Ryoken form the Knights of Hanoi to avenge Kogami's death and prevent the Ignis from destroying humans.[5] Baira aided Varis in his attack on the Cyberse five years prior to the events of the series.[6]

Clarissa was one of the doctors who oversaw Skye Zaizen's condition, after she was defeated in LINK VRAINS and infected with a prototype of the Deleted virus created by the Knights of Hanoi.[7] By Baira's own admission, Skye was used as a test subject for the Deleted virus.

As the Knights of Hanoi began their full-scale attack on LINK VRAINS, Baira provided the Deleted virus to Dr. Genome for use in subjugating defeated Duelists as they searched for Playmaker. She and Faust joined Varis on a rooftop as Varis lamented the naivety of the lesser, glory-seeking members of the Knights who did not know their true purpose. She and Faust reassured Varis that Genome was making his move and that they'd provided him with the Deleted virus.[2] When Playmaker defeated a Knight of Hanoi and questioned him as to how to cure the Deleted, Baira purged the Knight's data before he could expose her. She and Faust later assisted their fellow Knights against SOL Technologies' A.I. Duelist army, defeating them all in seconds.[8]

After defeating the A.I., Baira and Faust returned to the Knights' control room. They noted that the defeat that SOL Technologies had suffered would keep them quiet for a while. Baira asked if Faust was really okay with helping Varis commit an historical cyber-crime despite treating him like a little brother, and discussed their plan to lure Playmaker out with the Deleted virus in order to capture his Ignis and find the Cyberse before Dr. Kogami's plan came to fruition.

Clarissa ended her shift at the hospital early, observing the Deletion of a Duelist in a car outside and then heading home, unaware that she had been recorded on the security cameras. She logged into LINK VRAINS, finding Frog and Pigeon. Observing that they were journalists, she asked if they knew where Playmaker was, and prepared to Delete them, but as she noted that they really didn't know where to find Playmaker, Blue Angel showed up and aggressively challenged Baira to a Duel, stating she was in a very bad mood. Baira was surprised that Blue Angel had returned to LINK VRAINS, much to Blue Angel's irritation. Baira revealed to Blue Angel that she was used as a test subject to create the Deleted virus and that she was its creator, and Blue Angel furiously vowed to defeat her. Accepting her challenge, Baira conjured a Data Storm, and the two Speed Dueled. Blue Angel quickly Link Summoned "Trickstar Holly Angel" and began dealing damage to Baira with her burn effects. Baira warned Blue Angel that her Deck had become too well-known and that she was prepared to counter it. She set up her "Temple of the Kings", using it to activate her "Current Corruption Virus" the same turn she set it and combined it with "Dark Mummy Surgical Forceps", knocking Blue Angel off her Duel Board, though Blue Angel was able to keep "Holly Angel" on the field with "Trickstar Perennial".[5]

Baira's "Surgial Forceps" and "Virus" cards continued to press Blue Angel back; by drawing a Trap Card, the effect of "Surgical Forceps" inflicted 500 damage to Blue Angel, and by using her "Malevolent Malpractice" Skill, she brought out two "Dark Mummy Infusers" to protect "Surgical Foreceps" from Traps and trigger her "Root Ransom Virus" to sap the ATK of Link Monsters to zero and negate their effects. She attacked "Holly Angel", depleting most of Blue Angel's LP, but protected "Holly Angel" once again with "Trickstar Perennial". Blue Angel used her Skill on her next turn, which would allow Baira to draw three cards. Baira noted that Blue Angel would lose if she drew a single Trap, but despite her ratios, she was unable to draw a Trap and her cards were banished. Blue Angel's move had allowed her to assemble enough monsters to Link Summon "Trickstar Bella Madonna" and destroy the "Infuser" linked to it, allowing Baira's own "Virus" to affect "Surgical Forceps", though "Bella Madonna" herself was unaffected and defeated Baira. As Baira lost, she reflected on how Blue Angel had been able to turn the Duel around through hope, and wondered how she had fallen this low. Deciding that it wasn't too late to make amends, she released the Deleted as her LP fell to zero. After the Duel Baira commented that Blue Angel was back, and Blue Angel replied that she was only fighting for herself. Baira revealed that she had freed the Deleted, and Blue Angel asked her why. Baira claimed that Blue Angel was able to change her heart, and that she may have fought for herself, but could change those around her. She encouraged her to carry her hopes onto others by fighting for everyone, before being purged, vanishing into golden data. Unbeknownst to Clarissa, Yusaku Fujiki and Kal Kolter had discovered her identity and found her in her apartment. They were prepared to question her, but instead saw a screenshot of Varis closed her field of vision. Despite not being logged in, she wasn't waking up, and they called doctors for her.[1] After Playmaker defeated Varis in their second Master Duel, she was released.

After awakening, Clarissa was arrested and placed in a high-security prison. Ryoken, Specter, Aso and Dr. Genome rescued her, and she asked them if a new battle was starting. Ryoken confirmed that there was.[9]

While Varis rescued Playmaker and Ai from Windy and Lightning, Baira and her fellow Knights attacked Windy's fabricated Cyberse, defeating his Echoes.[6][10] After defeating the Echoes, Baira, Genome and Faust entered Windy's palace to find Varis on 100 LP, though Baira believed that Varis wouldn't lose. Specter and Soulburner arrived and Lightning attempted to capture them, though the FIRE Ignis, "Flame" blocked Lightning's efforts and freed Playmaker and Ai. Varis then defeated Windy, and ordered the Commanders to erase him. Baira and the other Commanders unleashed a virus that impaled Windy on spikes, but Lightning rescued him. Bohman and Harlan then arrived, and Lightning revealed Jin Kolter.[11]

Lightning revealed that he had been behind the destruction of the Cyberse, though he couldn't settle matters due to Baira and Dr. Genome's virus infecting Windy and he fled after declaring war on humanity. Baira and the Knights remained in Windy's palace as Playmaker and Soulburner pursued Lightning, Bohman and Harlan. Varis decided to let Playmaker and SOL Technologies battle the Ignis for now, and ordered the Knights to let SOL Technologies know the Ignis' location.[12]

When Varis enacted his plan to use the Tower of Hanoi to scan for Lightning's location, Clarissa, Aso, and Genome remained on his speedboat to support Varis and Specter from the real world.[13] Their feed suddenly deactivated, and Clarissa asked her fellow Commanders what had happened; Aso explained that the entrance to Mirror LINK VRAINS had closed and they started working on getting their connection back. Kolter send them the feeds of Playmaker's team; Clarissa noted that he dealt with problems quickly. They watched as Lightning approached Specter to Duel him, locking Specter down on the first turn with an Extra Link. Aso and Genome worried over whether Specter would be able to break the Extra Link, and Clarissa noted that they would have to trust Specter.[14] Specter was able to reverse the Extra Link, but Lightning defeated him and claimed his data.[15] Soulburner was able to defeat Windy and Flame absorbed his data, but Bohman defeated Blue Maiden and acquired hers, Aqua's, and Earth's data. Footage then showed Playmaker Dueling Kolter, and Clarissa received a program from Kolter to hack LINK VRAINS; Aso deduced that Kolter had anticipated being used by Lightning and had sent them the program as a result. They quickly started working on the program to help Varis as soon as they could.[16] They finished the program just as Playmaker defeated Kolter.[17] Clarissa launched the program, successfully freeing Varis, Playmaker and Soulburner, and Aso immediately contacted Varis, who reassured them he was all right and asked them to send a message to Lightning, then asked them to go to Café Nom to safeguard Kolter. Clarissa remained on Ryoken's speed boat, while Aso and Genome went to Den City.[18][19]

Clarissa uses a "Virus" Deck.[5] To facilitate her use of "Virus" cards, she uses DARK monsters, including the "Dark Mummy" archetype, and "Temple of the Kings" to accelerate her Trap usage. Her Skill, "Malevolent Malpractice", allows her to replenish her supply of monsters.