"A Web of Deceit, Part 2", known as "Darkness that Engulfs All: Immortal Dark Signer" in the Japanese version, is the twenty-eighth episode of the Yu-Gi-Oh! 5D's anime. It first aired in Japan on October 8, 2008 and in the Untied States on May 23, 2009.

Yusei Fudo continues his Duel with the man with the spider mark. His opponent reveals himself to be a Dark Signer. The reporter Carly Carmine tries to get a scoop as she watches the Duel. Meanwhile the other Dark Signers influence people to stand with them in their fight against the Crimson Dragon.

A council of Dark Signers are aware that one of the two target Signers, Yusei Fudo, has engaged in a Duel with one of their members.

Carly Carmine arrives on the scene of Yusei and the Dark Signer's Duel. After catching her breath, she is puzzled by the purple wall of light around the Duel, but assumes it could be the Solid Vision. She spots Yusei, grabs her camera and begins to think up headlines. She sees the glow on Yusei's arm, but also notices his opponent has one too. 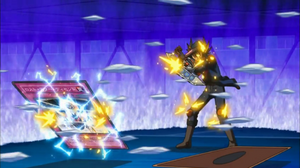 After Yusei is thrown back by an attack from "Frozen Fitzgerald", she begins to doubt that the Solid Vision that is causing the strange behavior.

Yusei asks his opponent if he's a Signer. As this goes unanswered, Yusei vows to fight him with the belief in his cards, regardless of who this guy is.

As Yusei faces difficulty with the effect of "Frozen Fitzgerald", his opponent reveals himself to be a Dark Signer as he states that together with his dark mark, a Dark Signer can come back as many times as he wishes. He claims that before long, Yusei's Mark of the Dragon will be dyed pitch black.

Not tolerating his opponent, Yusei explains that when he duels, neither the bonds with his friends or the hope of victory vanish from the field, until the end of the end, after asked about the effect of "Sonic Chick". With that in mind, the Dark Signer attempts to simply take out his Life Points instead. He uses "Drain Strike" to allow "Fitzgerald" to get at Yusei's Life Points, while unable to destroy "Sonic Chick".

With Yusei so far behind in Life Points, Carly foresees a great scoop. The Dark Signer sees Yusei's low Life Points as an indication of the fate he depends on and informs him that Satellite is nearing its hour of destruction, but believes Yusei will be unable to witness it.

Carly, Yusei and Grady after the Duel.

Carly is impressed with how the new King duels, but is more so pleased that she managed to get an exclusive scoop on this action.

Yusei rushes over to his opponent demanding answers. But the boy has no recollection of what just happened. Yusei notices his dark mark has vanished. Carly rushes over, recognizing Yusei's opponent as Grady, now that his hood has been tossed off.

After Carly is introduced to Yusei she takes out her microphone to interview him. A glowing spider flees from Grady's body and his Deck begins to glow for a second. Yusei and Carly turn to him. Carly tries to ask him a few questions, but Yusei looks at Grady's Deck. He notices both the Dark Synchro and Dark Tuner monsters have disappeared.

Carly tries forcing some memory out of Grady. After telling him to follow that "mental thread", the word "thread" reminds him of seeing thread shortly before he blacked out. Although unaware to him, that thread was a line of web that let the spider into him, back when he was listening to the Dark Signers preaching.

Carly and Grady give themselves up to Sector Security.

The three of them hear Sector Security approach. Yusei gets up and flees, leaving the other two. Carly tries to follow him, but Grady catches her by the ankle causing to her fall forward. He asks her not to leave him. Carly's camera slides away from her over to the Securities. One of them picks it up and points to a car that was tossed onto another as a result of the Duel and asks if they're responsible. Carly frantically shakes her head and immediately puts her hands up. Grady's arms follow suit.

Other reactions to the Duel[edit]

A spider dark mark missing two legs is shown. One of the legs reappears. The owner pulls his glove over the mark on his arm. They deduce that one of their target Signers got away. However, they're not too worried as they anticipate the Signers will soon be caught in their web.

A spider hangs from a piece of web over Jack's hospital bed.

Yusei returns to the hideout and reports what happened to Tanner.

Rex Goodwin watches Yusei and Grady's Duel on a monitor. He dismisses it as he is contacted by another man on a screen behind him. Goodwin was aware the Dark Signers would appear. The other man asks Goodwin if he'll be okay.

The Dark Signers preaching in Satellite.

In Satellite, two figures in Dark Signer regalia start preaching about hope for Satellite. They say that the Crimson Dragon that appeared in New Domino City is a wicked god who will bring disaster to this world; Those gathered round them will be saved from this. The threads from a large web above them drop onto these people too. The people begin to chant against the Crimson Dragon.

Rally and Nervin appear carrying shopping bags. Rally tells the group to quit this. Nervin tries to calm him down, but Rally continues and tells them that Yusei is now King; A Duel King has been born out of Satellite; The Crimson Dragon appeared during Yusei's Duel and he's sure it brings good luck. Nervin covers Rally's mouth. The crowd menacingly approach Rally and Nervin. Nervin tells Rally that they shouldn't get involved like this. Rally argues that it's the truth and tells the crowd to check for themselves. Blister watches them in secret as they do this.

Back at their base, Rally looks up an article about Yusei, but is angered because it refers at him as "the alleged King", and implies that he cheated during the duel. Blitz, Tank and Nervin aren't impressed either, knowing that the inhabitants of Neo Domino City never give anyone born in Satellite a chance. Blister enters their joint, telling them that he's been looking for them.

Carly is enraged that Angela didn't get one comment from Yusei, but she's wrote a "half-baked" article. A man opens a door and calls in to Carly to keep quiet until her turn to be questioned.

Carly draws another card, "Fortune Fairy Chee", from her Fortune Telling Deck, which says her fortune for today is "super pinch", but she might gain an edge over her competition, so cheer up. Angrily she asks how she's supposed to cheer up in here of all places. The man opens the door and yells at Carly to keep quiet again.

At Blister's hideout, Yusei still hasn't heard from Blister about his friends since they were aid to be released. Worried about what he's heard about Satellite, Yusei plans to go back. Leo and Luna advise against this as it's too dangerous and Yusei had said Signers should stick together. Yusei walks over to them and says that Signers are always bound to meet again.

A number of Securities appear outside the building, lead by Trudge. Trudge calls Yusei a Satellite scumbag and says that the city is no safe refuge for him. Himuro/Tanner calls this bad timing, but Yusei sees it as quite the opposite. He walks out to Trudge and says he needs to speak with Rex Goodwin anyway.

Turn 6: Yusei
Yusei draws "Nitro Synchron". Yusei Normal Summons "Nitro Synchron" (300/100) in Attack Position. As Yusei controls a Tuner monster, he Special Summons "Quillbolt Hedgehog" (800/800) from his Graveyard in Attack Position via its own effect, but it will be removed from play when it leaves the field. Yusei activates his face-down Continuous Trap Card "Graceful Revival", selecting a Level 2 or lower monster in his Graveyard and Special Summoning it in Attack Position, but if "Graceful Revival" leaves the field that monster will be destroyed and "Graceful Revival" will be destroyed if that monster leaves the field. He Special Summons the Level 2 "Speed Warrior" (900/400) from his Graveyard in Attack Position. Yusei tunes the Level 2 "Speed Warrior", Level 2 "Quillbolt Hedgehog", and Level 1 "Sonic Chick" with the Level 2 "Nitro Synchron" to Synchro Summon the Level 7 "Nitro Warrior" (2800/1800) in Attack Position. As "Speed Warrior" was removed from the field, "Graceful Revival" is destroyed and due to the effect of "Quillbolt Hedgehog", the latter is removed from play. As "Nitro Synchron" was sent to the Graveyard for the Synchro Summon of a "Nitro" Synchro Monster, Yusei draws a card. He draws "Junk Barrage". Yusei activates the Equip Spell Card "Junk Barrage", equipping it to "Nitro Warrior". When "Nitro Warrior" destroys a monster by battle and sends it to the Graveyard, Grady will take damage equal to half of the destroyed monster's ATK.