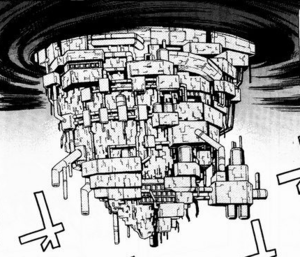 Seibal floating in the sky

The Aerial Fortress Seibal (天空城セイバル, Tenkū-jō Seibaru) is a location in the Yu-Gi-Oh! 5D's manga, similar to the Divine Temple from the anime.

The Festival of Duality is conducted inside this fortress,[1] which is the place where the Ultimate God is sleeping.[2]

Seibal is a huge castle-like building which floats in the sky. When the Festival of Duality begins, a pillar of light is emitted from the center of it towards the ground, which is the road where the Duel between the Duel Priest and Priestess is conduced.[3] Once the Duel has ended, a person who enters the pillar is conduced to the fortress.[4] Inside the fortress, the most notable locations are the Northern and Southern Sky Corridors, which are where the secondary Duels between the Duel Priests happens to decide the King of Sky's Lock.[1] The Ultimate God is sealed in a kind of small tower located in the center of the fortress. The fortress is also known to have a kind of room with pictures of the Duel Dragons carved in the wall. The room also contains a stone throne, where Sect used to sit. After defeating Akiza, Sect brings her to this room,[1] where she is offered as a sacrifice for the Ultimate God's revival.[5]