Illusion Magic (, Gensōma), also translated as Illusionist and known as Dreams in some English video games, is one of the four types of Magic Alignments.

It is strong against Black Magic and weak against Demon Magic.

Monsters of this Alignment tend to be surreal, from another dimension ("D.D. Warrior"), illusory ("Talons of Shurilane"), tricksters ("Genin"), or manipulators of illusions ("Illusionist Faceless Mage"), sleep ("Invitation to a Dark Sleep"), etc. 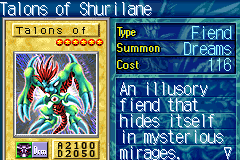 "Talons of Shurilane" in Yu-Gi-Oh! Reshef of Destruction
Retrieved from "https://yugipedia.com/index.php?title=Illusion_Magic_(Alignment)&oldid=4973044"
Category: