From Yugipedia
(Redirected from Leon Wilson)
Jump to: navigation, search

Leon von Schroeder, known in Japan as Leonhart von Schroider, is a character in the Yu-Gi-Oh! anime. He is the younger brother of Zigfried von Schroeder. He is a very famous Duelist who uses the alias of "Leon Wilson" when he Duels. He joins Kaiba's KC Grand Championship tournament to help his brother gain revenge on Kaiba Corporation, though he also aspired to Duel Yugi Muto.

Leon has hazel eyes and dark maroon hair, in contrast to his brother Zigfried's pink hair, and ties it with a hairband. His attire consists of a light-blue sleeved school shirt with a cream vest bearing a school insignia, navy-blue shorts, white knee socks, and black dress shoes. In his youth he wore a dark green jacket and shorts, a white shirt underneath with a tie, black socks and brown dress shoes.

Leon is polite and respectful of those around him, but has small doubts about himself when he made it past the first round. Leon likes to keep an optimistic attitude, and this is shown through his Duels by enjoying them, and is very modest in his skills, never one to gloat in his victories. However, during his Duel against Yugi, he became more determined and brutal, now Dueling to help his brother, unaware of his true intentions.

He idolizes his brother, yet realizes that Zigfried's actions are wrong. Leon is a big fan of Yugi and has admired him since Duelist Kingdom. In a scene removed from the dub, Leon is seen watching Yugi in various tournaments on TV. Leon has wanted to Duel against Yugi since Duelist Kingdom and gains his chance in the finals of the KC Grand Championship.

Leon's family never paid very much attention to him when he was a kid. They were always focused on preparing Zigfried to take over the company, and they would punish him for distracting Zigfried from his studies. 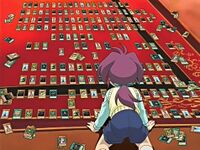 Leon discovered a fondness for fairy tales and wrote a letter to Maximillion Pegasus, requesting that he make fairy tale cards. After building a talent with computers, as well as Dueling, he used these skills to enter tournaments under a false name so his family wouldn't find out, until was discovered by Zigfried. Who, rather than being angry or ashamed, was impressed with his brother's talents. Recognizing his abilities, he asked his brother to assist him with running their family business, promising him that he would never be alone again.

Leon first meets Yugi after a friend of his finished up a Duel against the Duel Machine, where he and the other people in the arena are locked in after Zigfried hacked the controls. He then witnesses Yugi Duel the Duel Machine, using Rick's Deck, and winning. Later, during a party held to kick off the KC Grand Championship, he greets Yugi and Joey, sheepishly telling them that he's competing too. When Roland introduced him, he explained that Leon was a Dueling prodigy, shocking Yugi and his friends.

During the first round of the tournament, he is paired up against Doctor Goat. Tea wishes him good luck, causing him to blush from the encouragement and nodding his head. Although the doctor's eccentric behavior was confusing to him, Leon still managed to win, and watched as his two nurse assistants took away on a stretcher.

His next Duel would be against Ethan Shark in a overwhelming victory (as evident he still had 4000 Life Points by the Duel's end). Zigfried's second virus attack, however, would cause the haunted house they were Dueling in to go haywire, creating mass confusion for him and the other Duelists (as their Dueling grounds were also affected by it).

He later Duels against Rebecca Hawkins in the semi-finals. Their Duel was a back-and-forth match in the early parts, although Leon's Fairy Tale cards proved to be too much for Rebecca. He was able to counter each one of her attacks and strategies, eventually turning her own "Diamond Head Dragon" against her with his "Thorn Princess", winning the Duel. He tried to cheer her up after she lost, and although she snapped at him, told him to be prepared as there was still a long way to go before the tournament's end.

When Zigfried is disqualified, he recruits Leon to help him with his plot to destroy KaibaCorp, by activating "Golden Castle of Stromberg", which will release a computer virus into the system. Leon initially agrees because he is unaware of his brother's plan believing that winning at Kaiba's own tournament and humiliating him will be enough.

During the Duel with Yami Yugi, he eventually comes to his senses and refuses to help Zigfried, but is unable to remove the card from play. Yugi, however, comes up with a strategy to destroy it by turning its own effect against it, while Seto Kaiba works on stopping the virus. Once the "Golden Castle" was destroyed, Yugi would win the Duel using a combination of "Necromancy", "Diffusion Wave-Motion", and "Dark Magician".

Afterward, Yugi praised Leon for his courage and strength, which made the latter break down into tears of joy. Even though Zigfried tried to salvage the situation, still thinking his virus did the job, he learns from Kaiba that not only was the virus stopped, but all the data had been completely restored, thereby crushing Zigfried's plans. However, Leon comforts him, telling him what he learned form the Duel with Yugi to help motivate his older brother, causing Zigfried to tearfully hug his brother in thanks, restoring their bond. 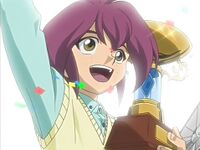 In the dub, Leon made a final appearance in episode 220, standing at the balcony of his castle, looking up at the sky. In the Japanese ending, Leon was seen with Zigfried, who was seen trying to make a business deal with Maximillion Pegasus.

Leon uses a Fairy Tale Deck, composed of cards that were specially created by Maximillion Pegasus upon Leon's request, based on fairy tale creatures (in the dub, he says that Pegasus felt the same way he did about fairy tales and decided to make the series of his own volition). Leon's Deck is varied and balanced, with effects ranging from effect negation with "Curse of Thorns" to swarming the field with "Iron Hans" and "Cinderella". His cards largely lack pure power, with only "Globerman" and "Hexe Trude" being stand-out attackers. Leon circumvents this with monster destruction effects like "Spinning Wheel Spindle" and "Gingerbread House".