From Yugipedia
(Redirected from Water)
Jump to: navigation, search
This article is about the Attribute. For the Type, see Aqua. For the Alignment, see Water (Alignment).

WATER decks are historically themed after long-term resource games while locking down the opponent. WATER archetypes in 2021 typically focus on making long combo plays, perhaps an extension of their focus on resources. They are also effect-wise associated with removing cards from the opponent's hand, such as through the effects of "Evigishki Gustkraken", the "Deep Sea" monsters, or "Moulinglacia the Elemental Lord".

In some card effects (e.g. "Mistar Boy") and in certain video games, the WATER Attribute is positioned as the opposite of the FIRE Attribute.

Across the franchise, WATER monsters are primarily used by the following characters. 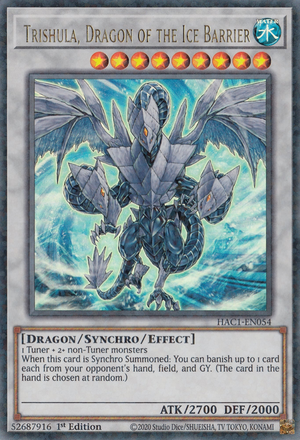 "Trishula, Dragon of the Ice Barrier"