From Yugipedia
(Redirected from Grieger)
Jump to: navigation, search
For other versions of this character, see Greiger (disambiguation).

Greiger, known as Bommer in the Japanese version, was initially one of Goodwin's five Dueling Assassins as well as a member of Iliaster. Later, he became a member of the Dark Signers, bearing the dark mark of the killer whale and having his "Earthbound Immortal Chacu Challhua" (however, in Z-one's time-line he was not a Dark Signer[3], as a recording file implies).

An honorable Duelist, Greiger was prideful, yet stoic. Likely of South American origin, he came from a destitute village and Dueled to provide financial aid to it. He was transformed into one of the Dark Signers when Roman killed him by hanging him over the Negative Ener-D. When his "Earthbound Immortal Chacu Challhua" was Summoned, it held the souls of his siblings and other children from his village. After Goodwin's defeat, he was brought back to life and learned that the Dark Signers were responsible for the destruction of his village.

Greiger grew up in a poor village near the Nazca Lines.

It was thought that Iliaster had used Greiger's village as the site of an "experiment" to summon the Crimson Dragon, which completely destroyed the village and killed his entire family. With such information that Iliaster didn't want anyone to know, Greiger then became involved in some sort of compromise with Rex Goodwin, and agreed that KaibaCorp would provide aid for the reconstruction of the village in exchange for exposing the Signers during the Fortune Cup.

Greiger looked after a group of orphaned children, along with his younger siblings Annie and Max. The Earthbound Immortals, mainly "Chacu Challhua", caused their disappearance.

His first match was against Luna, but as her brother was substituting for her, he ended up Dueling a disguised Leo instead. Though Leo put up a valiant fight, Greiger won easily, and was never even intimidated. During the break between his match and the next match between Akiza Izinski and Gill Randsborg, Greiger was stopped in the hall by Lazar, and after he said that Greiger did well in his Duel, Greiger pointed out that no matter how they looked at it, the person he just fought was clearly a boy, to which Lazar showed him a paper which showed that Leo and Luna were in fact twins.[1]

As Akiza faced off against Gill Randsborg and was left with only 50 Life Points, Greiger thought that the match would be over, but Yusei thought otherwise.[4] When it was the real Luna's turn to Duel, Greiger told Yusei that the imposter had showed him some fine Dueling and then wondered how the genuine article would fare.[5]

Greiger's opponent in the semifinals was Yusei. It was revealed during the match, that Grieger had learned of his sibling's deaths (In the dub, death was still strongly implied during the match). Greiger gained an advantage over Yusei by summoning his trump card, "Flying Fortress SKY FIRE", within the second turn of the Duel. Yusei was able to destroy it, but not before being left with only 300 Life Points after taking massive damage from both its massive attack power and destructive burn effect. Despite losing his key card, Greiger, however kept Yusei at bay with his "Chariot Pile" trap until he Summoned "Dark Strike Fighter", but Yusei was able to defeat Greiger before he could use its burn effect to end the match. Having lost the match and enraged at no longer being able to help his younger brother and sister, Greiger not only revealed the truth about his village to the audience, he then decided to take revenge on Goodwin for his village's destruction. Greiger used his Duel Runner to rocket towards the box room, and intended to kill Goodwin. Yusei attempted to stop him, but one of the spikes on Greiger's Duel Runner broke and flew off and crashed into Goodwin's control room. Goodwin caught it with his prosthetic hand. When both riders crash landed, an enraged Greiger grabbed Yusei and asked him why he stopped him. Yusei told him that if he went through with it, then he would have been no better than Goodwin.[6][7]

Greiger was arrested by Sector Security after his assault on Goodwin. He left a message to Yusei and told him to carry out his own mission.[8]

Greiger was being transported in a Security vehicle at the time the abilities of the Dark Signers Misty Tredwell and Carly Carmine awoke. The city was shaken as the Lizard and Hummingbird Nazca lines appeared in New Domino City. The vehicle transporting Greiger was within the borders of the flaming lines. When Misty Summoned "Earthbound Immortal Ccarayhua" the guards transporting Greiger as well as everyone else within the Nazca border were absorbed by it to fulfill its summoning requirements. Greiger was then freed from their custody by Devack, who seemed to know him somehow. Devack invited Greiger by saying that if the flames of vengeance still burned within him to join them.[9][10] 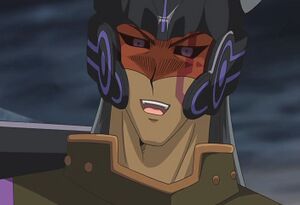 Greiger as a Dark Signer.

After Devack's defeat and the destruction of "Cusillu", Roman Goodwin proved to have a contingency plan. After he brought Greiger to the doors of the Underworld, Roman said that he was going to gain newfound power as a Dark Signer. Greiger agreed to stop Yusei in order to get vengeance on Goodwin. Greiger was then transformed into a Dark Signer after Roman killed him by hanging him. (In the dub, he was dropped into the Netherworld via a trapdoor, and the hanging thread was removed.) As a Dark Signer, he obtained an Earthbound Immortal, with his being "Chacu Challhua". Greiger attempted to catch up with Yusei, only to be cut off by Crow Hogan, who challenged him to a Shadow Turbo Duel.[11]

During the Duel, Greiger discovered that his Earthbound Immortal was responsible for the disappearance of his siblings and the orphans he cared for. Upon discovering this, Greiger attempted to back down, but "Chacu Challhua" telepathically requested him to continue, and furthermore to kill every Signer. Greiger refused, so it took over his body and attacked Crow against Greiger's wishes. 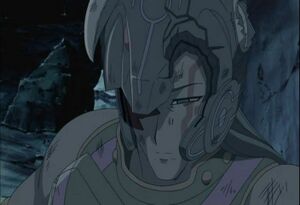 Greiger turns into dust after he loses

The Duel ended with Crow as the victor, and the souls of everyone "Chacu Challhua" had absorbed were released, including everyone from Greiger's village. Greiger, having to pay the price as a Dark Signer, crumbled to dust, but not before apologizing to both Crow and Yusei. He died happy knowing what finally happened to his village and that they were all free. Later, a shooting star was seen over his village, and his brother and sister wondered if Greiger was also watching it.[12]

Greiger, upon being returned from the dead

When Rex was defeated in the final battle, and the King of the Netherworld was destroyed, Greiger was restored to life, along with the other Dark Signers except for Rex and Roman.[13]

Greiger returned home to his family and decided to travel to Nazca where they enshrined the Nazca Gods. After the Diablo attack on New Domino City, and Yusei obtained his Accel Synchro Monster, Greiger had a dream. The dream was about Jack Atlas being destroyed by his own Signer Dragon, "Red Dragon Archfiend". He then sent a letter to Jack and stating that "Jack Atlas would destroy himself with his own power if he didn't find a new way of fighting." Jack and Yusei end up going to Nazca to see what exactly was meant by the letter. Later the same day, Greiger had Jack Duel his younger sibling Max to see Jack's power. After Max's Duel, Jack left Greiger and Yusei on his Duel Runner.[14]

During Yusei's Duel against Z-ONE Greiger was seen cheering on Yusei.[17]

Greiger later appeared in episode 152 where he was seen briefly being defeated in a duel by Jack, who was self-training himself to once again regain his crown as the King of Riding Duels. He commented on how Jack's skills had improved once more.[18]

In Ground Duels, Greiger used a "Reactor" Deck, which focuses on Summoning his "Reactor" monsters and punishing his opponents for Summoning monsters or activating cards by inflicting effect damage until he Summons all three "Reactors" in order to Special Summon "Flying Fortress SKY FIRE".

Greiger also used a "Reactor" Turbo Deck, which also focused on his "Flying Fortress SKY FIRE", and gathering the necessary monsters through cards such as "Fake Explosion" and "Hidden Soldiers". If his original strategy fails, he can use his "Dark Strike Fighter" as a contingency alongside cards such as "Ultimate Flare" and "Chariot Pile" to inflict large amounts of effect damage.

As a Dark Signer, Greiger continued to use a "Reactor" Turbo Deck. The artwork and effects of his "Reactor" cards and "Fake Explosion" were updated to match their TCG/OCG counterparts. He also acquired "Dark Flattop", which he used to support "SKY FIRE". He also used cards such as "Darksea Rescue" and "Darksea Float" to replenish his hand as his strategy required a large amount of cards. If this failed, he used his "Earthbound Immortal Chacu Challhua" as well as a burn strategy through cards such as "Basara".